Review: The Plight of the Darcy Brothers by Marsha Altman 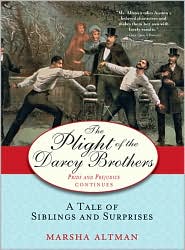 Title: The Plight of the Darcy Brothers

Second in a series, The Plight of the Darcy Brothers finds Fitzwilliam Darcy making hasty travel plans to the Continent to save yet another Bennet daughter from scandal.

It’s been an unintentionally (though enjoyable) Austen-esque summer here at Chez Book, Line, and Sinker. In addition to Altman’s terrific sequel, I’ve been (slowly!) working my way through the Spanish version of  Pride and Prejudice and finished Prada and Prejudice, at the recommendation of another blogger. 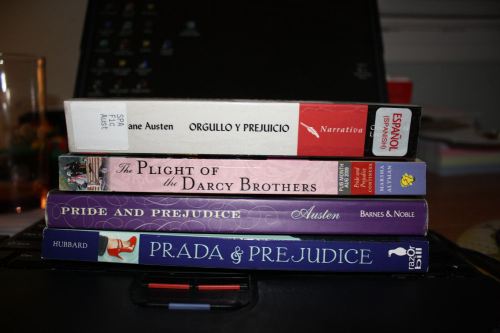 part of my 'on the nightstand' stack

It seems that Jane Austen fans can be divided into roughly two camps: the purists and the rest of us.  Austen purists may struggle with contemporary authors serializing Pride and Prejudice (or the other novels), but I think that if the author does his or her research and tells a solid story, these sequels can find success and have a place in the literary world.  (Take my poll at the end of this review and tell me how you feel about serializing classics!)

Marsha Altman is one such author, creating a realistic continuation of Pride and Prejudice while seamlessly incorporating new characters without detracting from the original story.  The Plight of the Darcy Brothers is the second installment in her continuing series and though I haven’t read the first book, had no difficulty following this story.

The novel follows Darcy and Elizabeth as they travel to the Continent, Italy specifically, in an effort to save the reputation of yet another Bennet sister.  Along the way, Darcy comes to learn several shocking things about his father and the Darcy family.  As they travel on, Darcy wrestles with  internal conflict, trying to come to terms with what he’s discovered.

Altman’s skillful use of narration helps the reader understand what motivates each character.  Told in the third-person omniscient, we can see into the minds of the majority of characters and it gives the story greater depth and authenticity.  Austen herself also wrote in this narrative style.

Altman doesn’t skimp on details and fills readers in on all the characters from the original novel.  The subplots keep the story moving and it’s a quick and entertaining read.  I thoroughly enjoyed this novel and have plans to read the first book shortly.  Readers who can’t get enough of Pride and Prejudice should give Marsha Altman’s series a whirl.

Thanks to Danielle at Sourcebooks for this review copy!

21 responses to “Review: The Plight of the Darcy Brothers by Marsha Altman”