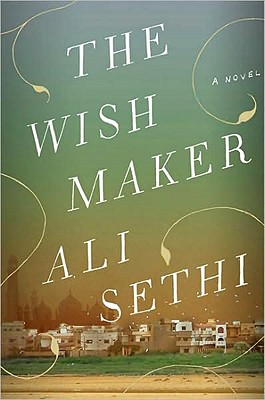 A sweeping saga told in lyrical prose about one Pakistani boy’s coming of age during a climate of political and social change.

Ali Sethi’s debut novel, The Wish Maker, is an ambitious novel–almost an epic–spanning two decades (plus flashbacks), several governments, and much social and political unrest.  Make no mistake, Sethi is a masterful storyteller with a mature voice that belies his young years–he was in his early 20s when he wrote this novel–but I felt that the story suffered from information and sensory overload.

The Wish Maker tells the story of Zaki Shirazi, a young boy growing up in a house filled with women.  Zaki’s mother is a journalist who writes for a magazine and leans toward the liberal left, while his grandmother is more of an old-fashioned conservative.  Zaki’s cousin also lives in the house and struggles to find herself throughout the novel.

The pages were filled with scores of secondary characters and it was challenging to keep everyone straight.  Additionally, unfamiliar terms and foreign phrases were peppered throughout and  I looked up several to give myself a more solid understanding of the story and dialogue.

This book could very well go on to receive much critical acclaim–the writing is wonderful–but for me it had too much going on and ambled along accounting for all the daily minutia of Zaki’s days.  I appreciated the imagery and characterization but felt that there was no real resolution with some characters and that some of the secondary story lines just petered out.

Thanks to Matt at Penguin Books (Riverhead) for this review copy!

How about you?  Have you read this novel?  Am I way out in left field with my review?   What’s your take?

10 responses to “Review: The Wish Maker by Ali Sethi”